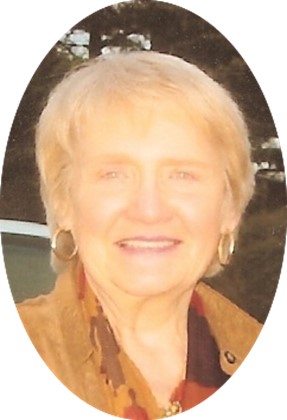 Six years short of her 100th birthday to which she aspired, this remarkable, globe-trotting, award-winning journalist, tribal jewelry aficionado, devoted mother and friend, and fun-loving challenger of the status quo, Ann Brinkerhoff took her final exhale. Born Mary Ann Stoltz, ‘Ann’ was raised in the steel mining city of Pittsburgh, PA. At age one, her older brother Billy died unexpectedly, leaving her, an older sister, Genevieve and younger brother, George. Later to be known for loving a good fight with City Hall, it is hard to believe that Ann was initially a shy, chubby wallflower, but blossomed into a slim, freedom-loving beauty while earning her degree in journalism at Penn State.

By age 27, she had already worked as a foreign correspondent in Casablanca, Morocco and Iceland. Returning to the US, General Motors/Chevrolet brought her in to train a resentful group of salesmen on how to sell Buicks to women. Surprisingly successful, she loved the yellow convertible they gave her to visit local showrooms. This same skill with people would enable her years later to give a requested impromptu speech in Noirobi, Kenya to and about the plight of hundreds of suffering, angry women surrounded by men with machine guns, winning them over with her combination of empathy and political truth-telling. She firmly believed that no one can destroy the human spirit and that good will always overcome evil.

Later, after fending off several marriage proposals, she said yes to James Don Brinkerhoff and proudly walked down the aisle in a full leg cast from a ski accident, her bouquet wired to her white, satin-ribboned crutch. Together, they had three children, Vance, Scott and Lynnea, and moved nearly a dozen times because of Don’s fast-tracked management career. As her daughter says of that repeated uprooting, “In each of those places, Mom successfully recreated the world for each of us. She was able to give her children and grandchildren what she had not received as a child–-deep affection, creative playfulness, and emotional security. Where she was, was our home.”

Life’s choices were not always easy. Ann’s life changed forever when she found the next love of her life, Connie Manghise, in St. Louis in 1974.  With the ending of her marriage, the family persevered with courage and faith when she had to make the heart-rending, yet courageous choice to leave her home, make new plans with her children, and head out to California. To support herself, she started a couple of small businesses: Creative Horizons/Brinkerhoff Associates, offering retirement planning seminars for major corporations, universities and hospitals throughout the Bay Area. She also worked in real estate, fixing up and selling homes as well as collecting and selling tribal jewelry as a dealer.

Ultimately, her love of life, sense of adventure, irreverence, unpredictability and love of the perfect martini became her trademarks along with her keen sense of humor which led to a multitude of fans and delightful pranks. At 85, she wrote her own obituary, excerpted here.

“Expatriate Ann Brinkerhoff died unexpectedly today in her adopted city of Madrid. A noted collector of people from every corner of the globe, Ms. Brinkerhoff was toasting her 85th birthday when she collapsed while laughing, still holding firmly to her favorite martini cocktail. A woman of extravagant tastes and tremendous vitality, she had recently returned from a 12-week walking tour of the Himalayas. To honor her, a gala featuring bull fights, balloon rides, fireworks, and the Boston Pops orchestra is to be held at her villa on the first day of September to celebrate her life and her death.”

At 93, in failing health for the first time, she moved into assisted living near her sons, Scott and Vance (whom she shared the same birthday with!) and devoted daughter in law, Vanessa, in Vero Beach, Florida. Her daughter, Lynnea, while stranded by Covid in India for months, called her every night at 10 p.m. to talk and sing the requested ‘camp song’ in the form of a lullabye. She leaves a legacy of two remarkable grandchildren, Jessica Karr and James Mulligan and two magical great grandchildren, Alison and Emilia Karr along with their father, ‘Dr Nick’. She adored her sister-in-law, Gail Stoltz, nephew, Jordan Stoltz and niece Amanda’s son, Spencer. She is also survived by her beloved Constance Manghise, her steadfast daughter and son-in-law, Susan and Jeff Maugenest, cherished brother and sister in law, Milton Weiss and Elaine Tucker; She felt a strong familial connection to Cherylyn and Todd Weiss, Tory, Gabby and Allie; Lisa and Douglas Weiss, Leah and Adam; Sandra and Jeffrey Weiss, Samantha, Jennifer and Jacqueline; Janet Lesniak and David Perlmutter.

Go placidly amid the noise and haste and remember what peace there may be in silence. As far as possible, be on good terms with all persons. You are a child of the universe, no less than the trees and the stars; you have a right to be here. And whether or not it is clear to you, no doubt the universe is unfolding as it should. Therefore, be at peace with God, whatever you conceive Him or Her to be, and whatever your labors and aspirations, in the noisy confusion of life, keep peace with your soul. With all its sham, drudgery and broken dreams, it is still a beautiful world. Be careful. Strive to be happy.”

We will deeply miss Ann, Mom, Mama-san, Mommy-ji. And just as deeply, we know that she is not gone. She insisted that we lean on the words of this reading to cope with the eventual loss of her human company:

I love you Mama. Thank you for tending to me every day of your natural life. You gave and gave and you always let me know how present you were with me. Yes, I was a sensitive soul and you never made me wrong for this. You showed me the world – traveling with you was amazing as we were perfect road warriors together! So much good has come of our profound alliance as mother and daughter. Thank you 100000x. See you around the next corner in whatever form you show up as. May we continue to be surprised and delighted as we relate more in the spirit world. I miss you and ache for your gracious and inspired company. I weep but I’m ok Mama. I pray that your journey is a splendid one…as I know you wish this for me and for those you loved so well here. Hail Mama…and as you used to love to say, Godspeed. Yours, always, Lynn(ea)