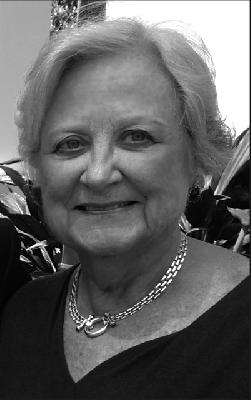 Diane Ferguson Steelman passed away on January 3, 2015, peacefully with her loved ones by her side. Diane was preceded in death by her parents, Thomas and Geraldean Ferguson, two sisters, and one brother. She was a loving mother to her son Steven Brooks Steelman (his wife, Maru), and daughter, Deana Marchant (her husband, Todd). She is survived by her five grandsons: Aiden, Darian, Damien, Ritter, and Tanner. She is also survived by her adored brother Major Roy J. Ferguson (and wife, Trudy). Diane was born and spent the early years of her life in Bridgeton, New Jersey where she was the oldest of five children. She loved the farm and riding her horse, Big Boy, while accompanied by her dog, Blackie. The family moved to Winter Park, Florida where she graduated from Winter Park High School. She was a majorette and even twirled fire! Diane went on to Florida State University and Stetson University where she was a member of Zeta Tau Alpha sorority. Diane and her husband, J.B. raised their children in Winter Park. She worked as a real estate broker and property manager for many years. She was a member of Winter Park Racquet Club and Interlachen Country Club where she was a competitive golf and tennis player.

In 1998, Diane moved to Vero Beach, where she worked part time and volunteered her time with many worth-while causes. Most meaningful to Diane�s time were her work with The Willow School and the Sunshine Physical Therapy Center for Children, where she served on the Board of Directors. She was passionate about building the Children�s Therapy Center�s success. She was a member of the Community Church of Vero Beach, where she volunteered in the Sunday school. Diane loved to travel and was adventurous. She loved the outdoors and had a sincere appreciation for the beauty of nature. She was kind, giving, and loyal to her family and friends, who will miss her very much, but will treasure the beautiful memory she leaves behind.