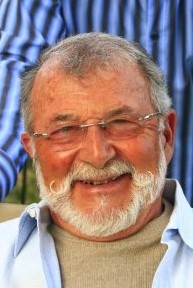 Frank Anthony Soraci, Jr., age 85, of Vero Beach, passed away Monday, July 6, 2020. A former resident of Hinsdale, Illinois, Frank moved to Vero Beach in 1993 after retiring from many years as an Outside Sales Representative of Clothing for the Chicago locations of Wrangler Jeans and Fritzi/You Babes.

Despite wearing a prosthetic leg, Frank enjoyed playing league basketball and golf and competed in several Amputee Golf Tournaments. For many years he was the beloved manager of the men’s league at Sandridge Golf Club, Vero Beach. Having attended the University of Wisconsin at Madison, he was a sports enthusiast who rooted especially hard for the Wisconsin Badgers, Green Bay Packers, and Chicago Bulls.

Frank was happiest with great food, good wine, and a robust cigar, of which he enjoyed faithfully with dear friends weekly. He loved traditional jazz and as a painter, his collection of lively oil paintings expressed his appreciation for the art form. With a sly smile and distinct style, Frank was an opinionated straight shooter who often got the last word, perhaps thanks to his booming voice, which could be heard by neighbors near and far as he bellowed “Charlotte!” in an unintentional Brando impersonation at the Soracis’ annual Memorial and Labor Day backyard picnics featuring Wisconsin brats and his sneakily strong sangria.

Married 55 years to his match, Charlotte Suzanne Toth Soraci, his soft heart held hers and vice versa up until this bittersweet end.

Frank was born in Trenton, New Jersey, to parents Frank and Ruth Zoesch Soraci, Sr. A father and grandfather himself, Frank is survived by wife Charlotte and his daughter, Kerry Soraci of St. Louis, son, Matthew Soraci of Los Angeles and daughter, Valerie Soraci of Boulder, mother to his grandchildren, Beck and Raine.

Due to COVID-19, there will be no services at this time.

Memorial contributions may be made to the Amputee Coalition; https://www.amputee-coalition.org/ways-to-give/honor-a-loved-one/

For those who would like to share personal stories about our treasured and thunderous Frank, an online guestbook is available via Thomas S. Lowther Funeral Home & Crematory

I feel honored to have had the opportunity to share a meal and bit of rum with Mr Frank Soraci. He was like no other and that’s a beautiful thing. Sending my love to the Soraci Family and thank you for sharing him with all of us. Love, Peppur

Charlotte, so very sorry for your loss.

What a great man! Mr. Soraci had the best smile and was always so welcoming. He had a great big laugh to go with that stylish mustache too! I particularly LOVED his sample sales in high school 🙂 Along with his incredibly bold and awesome wife, they raised three diverse, creative kids. One has been my lifelong friend. I love this family. Mr. Soraci will be missed. XOXOXO

Charlotte you have a beautiful family. You and your Frank raises an amazing daughter, Kerry. Reading this tribute to your husband has explained the love, passion, drive and determination of life Kerry has. In 55 years of marriage you have done some amazing things. Words are hard to come by at times like these. Just know that your love and examples in life have reached out and touched so many people in ways you will never know.

Thank you for the beautiful tribute that brought back so many memories. The sweet smell of cigar smoke and Frank’s big personality are part of who we are as Soraci’s, as cousins and family. It pulls on our hearts that we can’t be there in person to give you our love. Please know that we’re thinking of Frank, and sending love to you Charlotte, Kerry, Matt and Val. – Bev and Michelle

Charlotte – you are loved and cherished and I send you peace.

Only the fondest of memories of Frank. He taught me at a very young age the joys of bratwurst. Took me to a Badger Football game and we played softball in the backyard at the holiday cookouts. He will be missed by his friends and family for sure.

I never had the honor of meeting Frank, but if his daughter Kerri is anything close to him, I can imagine how loving and wonderful he was. Sending love and thoughts your way… ❤️

Ludwig Family will miss Frank. Always enjoyed visiting Vero Beach to play golf with Frank and Ned and have dinner with Frank & Charlotte and Ned & Lorry!

A good man. A loving husband and father. He is missed.

Charlotte, there is probably nothing I can say to make you feel better. I am so sorry that Frank is gone. I know how much you loved him and the empty feeling you have now. Please call anytime. There was no answer at home but left message on cell. Lean on the family, hug a lot, talk about Frank a lot it will help. Love you. Mary Lou

Frank (Mr. Soraci) was like a 2nd dad to me since I was 8 years old. As Kerry is my lifelong childhood friend, I spent countless days, evenings and overnight’s in their home. He had a stern countenance but a soft underbelly and those who knew him well knew this about him. He was a magnificent artist and truly loved his family, and I reminder sneaking that magnificent sangria at many a Memorial Day party. My world was better for knowing him, and I remember all the new foods I tried such as octopus (not trying was not an option) because of him. I will miss this 2nd dad of mine dearly, and hold precious a lifetime of warm and funny memories. Soraci family, I love you all and wish I could be with you during this time. Love, Christina

I hung out with Mr. Soraci on a few occasions when he and Mrs. Soraci were in St. Louis visiting their daughter Kerry. He was so much fun to be around and the humor would fly!! I remember him always smiling and laughing. I adore his daughter and she has been a close, supportive friend of mine for over 25 years, I know where she gets her wonderful, smart, wit and sparkly eyes. Hugs to the Soraci family❤️.

I have such fond memories of Frank. We shared office space for some years when I started in real estate. We could talk about anything… he was open and brutally honest, which I loved and respected…and was a wonderful guide in so many ways. Sometimes filling a ‘Dad’ perspective for me. We spent a few Christmas Eves together with he and Charlotte and family. Sadly I hadn’t seen him for awhile..I will always remember Frank, his humor, his fashion sense, his love of food, music, fantastic stories…Rest in Peace, Frank and much love to Charlotte, Matthew, Kerry and Valerie❤️❤️❤️❤️❤️

How lucky I feel to have landed in the friendship of this beautiful family so long ago. Mr. Soraci always had a kind word – and often a sarcastic one for Matt – there is never a dull moment during a visit to the Soraci household! I’m so grateful for the many weekends Mr. and Mrs. Soraci allowed us to crash their Vero Beach home in during our Florida years, that they forgave us for being stupid teenagers with van-related shenanigans, bought us the occasional dinner in Tampa when we were broke and Matt was off sailing, and for always, always cheering our little gang on. It was an honor to know Mr. Soraci and we will miss him! So much love going out to the whole family.

We enjoyed many happy times together. Dinners after golf, frog fests, and especially Charlotte’s delicious dinners on Easter at your home. He will be missed.

Charlotte and Matt-Pease accept my warmest regards. Frank was a great, always fun loving guy. I’m sure he and Jon and Helen Simon are up there having a good time right now. My thoughts are with you. Frank Bramson.

I never knew Frank. However, I knew Charlotte and the pleasure of being Matt and Val’s teacher. I knew they were part of a special family. As I read the tributes to Frank I know he had a lot of influence on them. I never knew Kerry but see her posts on FB. So, Charlotte, Kerry, Matt, and Val please know that my thoughts and prayers are with you, and I will toast Frank with you on the 15th. Bev