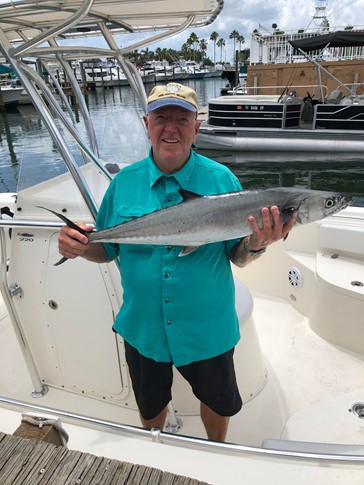 Greg was born June 25, 1949 in Cambridge, Massachusetts to the late Howard E Milligan and Lucille J Bassett. He spent most of his life between Massachusetts and Maine, then happily retired to Florida in 2019.

Greg worked as a police officer starting in Massachusetts then moved to the force in Yarmouth, Maine. He joined Volk Packaging in 1982 as a sales representative and retired in the same status, although he did serve as sales manager for almost 10 years during his time with the company. Volk Packaging meant a lot to Greg, so much so that he took his beloved wife, Sue, to the Volk Packaging 5-Year Club Party for their first date.

Greg was a devoted husband to Sue for an amazing 32 years, an outstanding father to Daniel, Joshua, and Kimberly, a wonderful father-in-law to Lori, Robyn, and RJ, and a loving grandfather to Megan, Drew, and Madison. He was excited for another granddaughter, Nora, who is coming in August. He was also a great brother to Brian and Cynthia, a caring brother-in-law to Stephanie and Raymond, and an amazing uncle, cousin, and friend to many more.

When Greg was not working he was spending time hunting, fishing, golfing, or traveling with family and/or friends. He was a true family man and the best friend anyone could ask for. He would give the shirt off his back and more. Greg was full of life and lit up a room wherever he went. No matter who it was he put a smile on their face. Greg will be greatly missed by so many.

My sincere sympathy to a fellow classmate of class of 1967 family. Peace and strength.

Greg was a great guy – full of life. We spent some of our teen years hunting and fishing along with Dale and Mike D. I was also there when Greg got “el kabonged” over his hard head with an acoustic guitar! LOL The world is a bit less fun without Greg. Rest in Peace, Brother.

Condolences to the family. Greg was a classmate class of ‘67.

RIP Brother. We worked well together on the West Bridgewater Police. This is hard to hear. Had fun in our pool area. You were well liked through out the town.

My sincere condolences to his wife Sue , (my friend ) Brian and Stephanie (my friends )and to his beloved children , grand children and the whole family and friends. I didn’t know Greg that much but, all I know is that he was a genuine man! Always with a smile! Helping by giving the pavers of his house for the dog park. Telling me I did great when I was line dancing on dances I never danced before in the parties we all got together. I feel for the pain you guys will have to go through because I have been there twice before. All I can say is, just remember, only time will ease the deep pain you are going through. I am greatly sorry for your loss! In friendship, Sylvia Dunn.

So sorry for your loss! Although we haven’t seen each other for years the childhood memories will last forever! Life takes us in many directions and we get involved with our own lives and forget to reach out and keep in touch. Take care of each other! God bless

My condolences to Greg’s family. I hung out with Greg in high school along with Don Williams and Dale Davidson, hunting, fishing , driving around EB, doing what all of us did in those days. Saw Greg at our last class reunion and he was just as I remembered, laughing, joking and having a great time. In reading about his life, I certainly recognized many of the qualities I remembered about my high school friend. Greg ,you will be missed.

Sue and Kim-I have been thinking so much about you, Josh and Dan. The world is less bright without Greg’s kindness, warm smile and wonderful sense of humor. I am so sorry for your loss. He was one of those people you just never heard a bad word about. I am sure you miss him terribly. Sincerely, Amy Volk

Spent many good times growing up with the adventures that come with cousins. Whether getting together in Chatham or at his parents places in Maine or Massachusetts each gathering we just picked up where we had left off on the previous visit. A connection not realized at the time. Condolences to the family. Jim & Marie

Sue and family, Our deepest sympathy during this most difficult time. We considered Greg a close friend. I always had a great time with him during the hunting season. He was truly a remarkable person, and he always made us smile and laugh. We will miss him. George and Jody