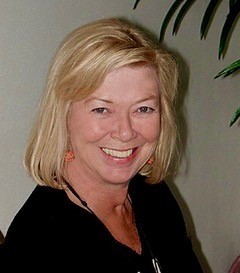 Teena Shaw Jackson, long-time Vero Beach resident, passed away in the waning hours of 2020.  Despite a courageous battle with several health issues, she succumbed to complications from Covid-19 at age 77.

Teena grew up in the far reaches of Florida’s east coast – Jacksonville and Miami. She went from business school and modeling in Miami’s Coconut Grove to fashion design in both Miami and Woodstock, NY. She later moved to Winter Park, Fla., where she received her real estate license from Rollins College, and enjoyed — along with her husband — remodeling homes. She often joked that perhaps part of her creative spirit came from living in Bob Dylan’s former home in New York.

After coming to Vero Beach in 1981 she joined the real estate world and worked with various developers on high-end projects. She co-founded Beach & Beyond Rentals, a successful residential rentals company she ran for 20 years. When she sold the business in 2011, she joined the offices of Alex MacWilliam Inc. and The Charlotte Terry Group.

Teena was a creative foodie. There was not a recipe or food show she could ignore. She loved preparing food, eating it, and sharing it with friends and family. Her two precious “marmalade” cats were named Biscuit and Nutmeg. She was an avid supporter of the Humane Society and sponsored many loving adoptees.

She will be dearly missed by her family: two sisters, Sandy Patterson of Vero Beach and Stacey Shaw of Arizona; her brother-in-law, Dale Thomas of Arizona; her nephew, Mark Patterson of North Carolina; her grandniece, Isabella Patterson and grandnephew, Samuel Patterson, both of North Carolina; and her wide circle of friends. Due to the pandemic, a celebration of Teena’s life will be scheduled at a later date. Donations in her name can be made to H.A.L.O. No-Kill Rescue, halorescuefl.org/donate/ or Visiting Nurse Assn. of Indian River County, vnatc.org.

Beautiful obituary! Teena was a “people person”, but she also was a compassionate “pet person”! I will dearly miss her! She knew Vero Beach well & was a friend to many. We had recently reconnected & I loved that we did. ❤️

To my friend, Teena. Your enthusiasm and kindness were always noted and notable. God calls you to His side and you are resplendent in glory. So be it. Mary Steele Castlow

Teena, you were the most hilarious, intelligent and fun loving person I have ever had the pleasure of knowing. I will miss you. Walk with God.